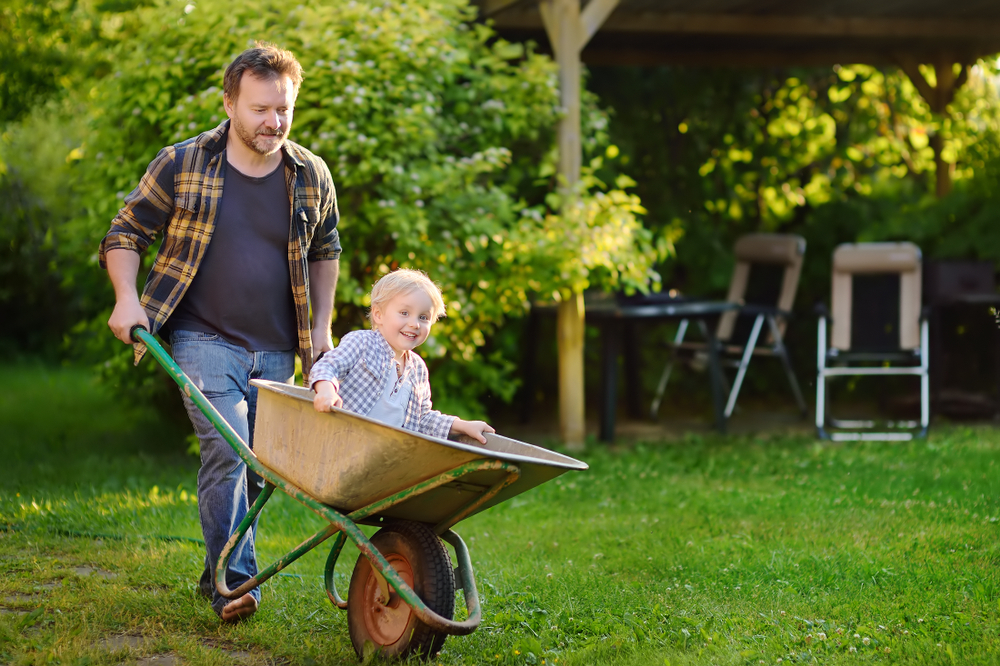 LOCAL father Cian Fanning has placed his regret on record following the implementation of a fun game which has received rave reviews of ‘again, again’ from his son Tom.

“Ah shite, he’s the stamina of a marathon runner and loves repeats more than a daytime TV schedule,” Cian said, cursing himself for chucking Tom in a wheelbarrow after finishing up some work in the garden.

Already mentally kissing goodbye any chance of watching the football that’s on any minute now, Cian began round two of a predicted 400 round game of wheelbarrow racing.

“See Cian, this is where your auld lad had it right; distant, shouty and terrifying. You certainly never asked him to keep entertaining ya,” Cian said to himself, just livid with himself for being a good dad.

“Again, again,” Tom insisted once more amid a barrage of laughter and screams of delight.

Slowly becoming fatigued by the playing, Cian wondered if his son was gullible enough to buy the old ‘it’s run out of battery’ excuse for the wheelbarrow.

“Maybe I could just fuck him out the side of the thing and then he could develop a lasting fear of the wheelbarrow, that’d soon sort him out, would end the requests anyway,” Cian reasoned with himself as he built up speed and aimed for hilly bump in the garden.

“No, that’d be mental,” conceded Cian, holding out hope his wife would emerge to bollock him for partaking in fun that ‘would end with someone getting hurt and I’m not driving anyone to the hospital’.

Covid-19 Reminds Local Man Of Pendulous Set Of Breasts, As Do Most Things

The Bull McCabe Put In Charge Of Dublin Airport Security

Delivery Man Sorry He Knocked Down Your Kid, But Do You Happen To Know Where 143 Greendale Is?