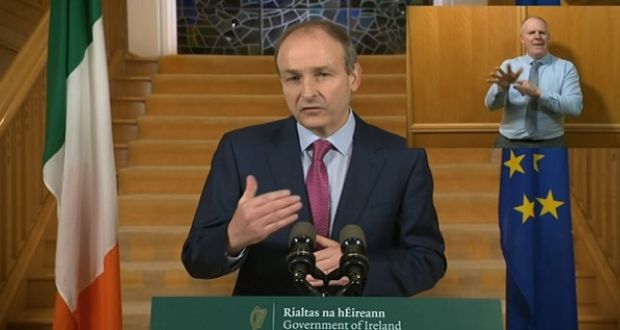 THE GOVERNMENT are overjoyed to announce they have begun discussions at cabinet over the easing and ultimate end to all Covid-19 restrictions but they just need you to sign here real quick.

“Oh, we can’t wait to share with the public the end to these testing times of hardship, isolation and economic atrophy,” shared Taoiseach Micheál Martin while handing out forms to the public passing by Leinster House.

While some ministers want the easing to begin immediately and others want to abide by the new recommendation from NPHET that a threshold of 90% over 16s being vaccinated, what is it clear is that the end is on the horizon.

“You can skim read that, it’s nothing important just sign it and we’ll be restriction free,” added coalition partner and narcoleptic Eamon Ryan, handing out a form with a heading ‘find out when restrictions end but first, pledge to vote FF/FG/G’.

The vote pledge for restriction easing has been labeled a disgrace by many, while the cabinet has described it as ‘only fair’.

“Look it, young people; this is how you get an electric picnic, nightmare bosses; this is how you stuff your workers back into the office like sardines,” explained a spokesperson for the freedoms for votes swap deal.

“Sure isn’t it the least you owe us for having a world beating vaccination program we would not have only for the fact we’re in the EU,” added the spokesperson.

“Just think of it like that time that Apple made everyone download the U2 album, sure you didn’t want to but didn’t you get a lovely iPhone at the end of the day. You might not want more coalition but do you want an end to restrictions or not?”.

“Didn’t Have To Show Anything. Nothing, Zilch,” Reports Man Passing Through Dublin Airport