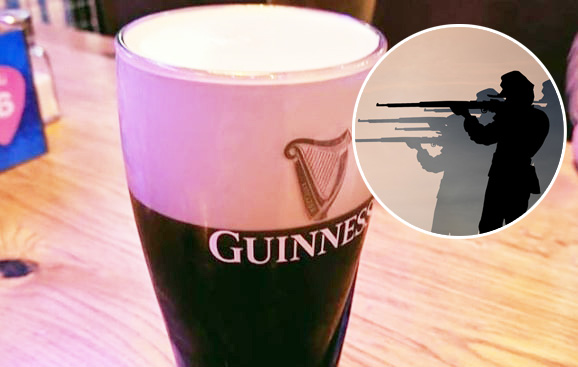 A STAGGERING 304 bar staff members have been publicly executed in Ireland so far this year after they were found to have destroyed thousands of innocent pints since the reopening of pubs.

As stipulated in the Irish constitution, bar men and women will be publicly shot outside their pub of practice for a wide range of poor pouring issues, including bishop collars on pints of Guinness and in some cases not giving any head to beers at all.

“We’re seeing a high rate of executions now with younger bar staff taking the helm,” a spokesman for the Vintners Association explains the soaring death rate, “pubs are finding it very hard to secure senior staff members and the delicate pouring of pints has been left to inexperienced teenagers who don’t seem to have a fucking clue how to pour a decent pint of Guinness, ale or lager”.

Over the past few months, social media users were haunted by images of poorly poured pints, leaving many people so devastated they have been afraid to go out for scoops anymore.

“I saw one pint of Guinness that was literally half white with a giant head on it,” said one man, who is now bound to his home in fear of the unknown, “what if that happens to me on my first pint out with the lads? What am I supposed to do then, complain to the bar staff like one of those doses and have them killed? I think I’ll wait until everything is fully back to normal again before even ordering my favourite, Smithwicks with a Guinness head”.

Gardaí are urging bar customers to report all bad pints to their local pint quality task force who will in turn euthanise pint offenders on the spot, without trial.

No-Kill, Lab-Grown Meat Set To Replace Whatever The Fuck Kebabs Are Made Of