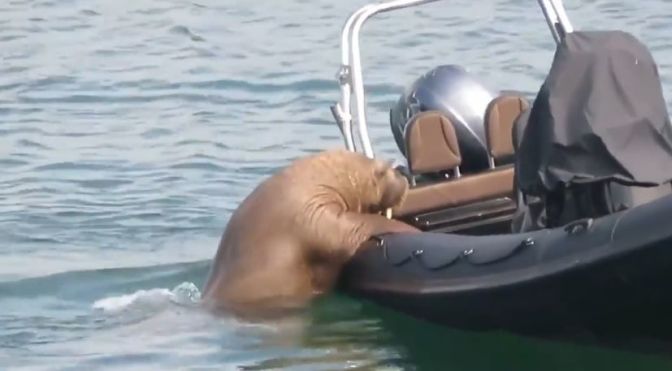 IN THE wake of wildlife experts urging immediate intervention due to Wally the walrus developing a grating Cork accent comes the news that Wally’s presence on a variety of boats is not because they make an nice alternative to floating arctic ice but due to the fact he can’t afford increasingly high rents in Cork.

“It’s not cute or adorable, the poor fucker has been priced out of things like the rest of us,” explained walrus and rent expert Thomas Hartigan.

“Like anyone, he wants to be where the action is and to be within waddling distance to the nearest Hillbillies, but he’s forced into squatting on some rich pricks’ boats until the rental market sees sense and sanity,” added Hartigan, laying bare the perilous plight renter throughout Ireland, be they human or walrus.

While climate change may be proving a disaster for Wally, it has proved a success for local Cork tourism as crowds flock to catch a glimpse of the arctic visitor.

“Wally put up a sign saying ‘need help with rent, €10 per photo’ but everyone just ignores it and takes the photo anyway,” added Hartigan.

While local tourist officials have announced plans for a Wally statue, giftshop, tour and museum, Cork like much of the country has not announced any plans for the rent levels to reduce in price.

Elsewhere, speaking from an undisclosed location a bitter Funghi was quoted as saying “oh, I see all you fuckers moved on quickly enough”.

Hold On A Fucking Second, Ireland Has Mink Farms?

Outrage As Skateboarder Charged €100 For Beating In Temple Bar